Off the Supercharger network? Mind your ABC’s

We’ve logged tens of thousands of miles on the Supercharger network. Roll in at 15%, charge to 80%, then move out to the next Supercharger. It’s a fast and convenient way to travel, and either we or the dog need frequent rest stops anyway. However, off the interstates, the rules change.

In September, 2019 we joined 61 other vehicles in a tour of the Lincoln Highway, which passes through Indiana in Fort Wayne, loops up to Elkhart and South Bend,  then follows US 20 through Laporte. It was a very different type of Tesla road trip driving. The objective of the Lincoln Highway Military Centennial Tour was to follow, as closely as possible, the original route taken 100 years ago by the US Army along the original route of the Lincoln Highway. The Lincoln Highway, like other historic secondary roads, presents some challenges if you are a regular Tesla owner who hops from Supercharger to Supercharger along the interstate. While your charging habits can quickly get you into trouble, you will also find that this style of travel emphasizes flexibility and fun as opposed to grinding out miles. You may like it.

Here’s an example of one day’s touring from Marshalltown, IA to the night-time stop at Council Bluffs,IA.

Plugging into A Better Route Planner (ABRP), the normal (I-80) optimal route hits the Tesla SC at West DesMoines.

However, the military route holds us to the old highway(currently US30), and makes sure we have time and sightseeing activities along the way. To force ABRP to take this route, we put in a series of waypoints at Ames, Jefferson and Dennison, IA. 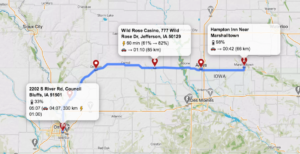 With wise coaching from our most experienced Tesla driver on the tour (2015 S-70RWD), we kept continual watch on PlugShare to see what was available.  If close to our route, we would swing a bit out of our way to check it out.  We kept in touch by text with the Teslas ahead and behind us on the tour route, and had a general idea of their state of charge and speed. We also kept track of each other on an app that we temporarily joined called Life360.

From our logbook: we departed Marshalltown,IA at 97% – due to some 110v charging that will be the subject of another post. Keeping to the posted speed limits,  we skipped the casino and went instead to the HyVee in Jeffersonville, we were able to charge from 54% to 75% a get a fresh coffee and donuts. At the end of the day, we arrived at the Council Bluffs Supercharger at 14%, a little above the predicted ABRP

It turned out that even in small towns, there were often Level 2 chargers within a block or two of the downtown or photo ops designated on our tour.  A fifteen minute stretch and walk about, then a few photos, and you had an additional ten miles in the tank. We often found L2 chargers at municipal or utility sites that were free.

The key point was: never pass up a chance to get a few more electrons – take a few minutes and Always Be Charging.